In this article, we discuss an abbreviated version of the history of the antique clock, with a focus on American Mantel Clocks, such as Eli Terry Clocks and Seth Thomas Clocks.

Antique clocks make beautiful display items for the home. Our daily lives are dictated by time. 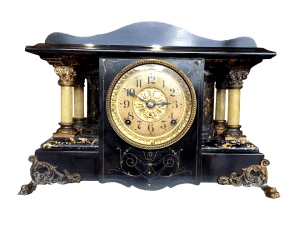 However, antique clocks are relics of the past that still serve a very important purpose. Learning about the rich history of antique clocks gave me a new appreciation for time keeping and technology. In the age of cell phones, it is easy to dismiss antique clocks as superfluous and antiquated. However, my opinion of them changed when I started to delve deeper into their fascinating history.

Historically, clocks and mantel clocks took centuries to develop. While ancient societies relied on the sun, moon, planets and stars to structure their lives, it wasn’t until the 13th century in Europe that mechanical clocks developed. Before that, the old clock tower was run by a man who simply struck a bell at different intervals of the day to call the community to prayer! In fact, the word clock derives from the Latin word for bell.

It was in the 15th and 16th century that more accurate table clocks made their way to royal palaces. Often palace clocks were beautiful and ornate. But these table clocks required constant maintenance and a staff of people to keep them running. These three inventions helped bring clocks to the stage of automation late in the mid 1600s:

These inventions allowed clocks to run more smoothly. Of course, they were more accurate timekeepers as well.

In addition, around this time, mantel clocks, also called “table clocks” developed with the invention of spring led movements. Beforehand, clock gears were run by weights and gravity. Now, springs could be wound with a key to power the mechanisms within a clock.

With the onset of the Industrial Revolution, mantel clocks in America reached mass production. Eli Terry and Seth Thomas, two of the most well known American clock makers, set up workshops to produce clocks in assembly line style in the 19th century. In other words, workers could tool multiple pieces of the same part. This allowed greater replication of the clock making process. In response, mantel clocks became more affordable for the average American in time.

Eli Terry was an American inventor and clockmaker from Connecticut. His amazing inventions changed clock making forever! Truly, he revolutionized clocks as a product and standardized their production. In doing so, clocks became more readily affordable for everyday consumers. Time keeping reached the mass market.

In about 1802, Terry realized that apprentices could rough cut the wooden gears and parts of a clock. Later, a master clockmaker could refine these pieces to fit inside the clock. Terry had the brilliant idea to use water powered machines to replace these apprentices. In 1802-1803, Terry purchased a mill. He set the grain mill up to use the water wheel and main shaft to run saws and lathes. Eventually, he created tools to automatically produce the wooden clock parts. Because of his ingenuity, Eli Terry was able to cut the important clock parts accurately and repetitively.

While this industrialization seems commonplace or normal to us, for the time it was revolutionary! During this time, a clockmaker could produce six to ten clocks a year. Eli Terry produced 3000 clocks a few short years later using this system.

Eli Terry made simple cases for his factory made clock parts. Indeed, he has been credited with the “pillar and scroll clock” design case. The pillar and scroll clock had a large clear dial in a wooden case that was about thirty inches tall and about 6 inches deep. It was decorated with two simple pillars or columns on either side and a scrolled arch on top. Despite being much smaller than grandfather clocks, Eli Terry perfected these clocks to run for a full thirty hours before they needed to be rewound. Sometimes, Eli Terry clocks are called “Thirty Hour Clocks.” He patented many of his products and inventions. The clocks became a raving success.

Eli Terry’s company marks an important time in Clock history. Indeed, his company deserves credit for bringing clocks and timekeeping to the American public. An original Antique clock by Eli Terry has incredible value on the market today. Many vintage clocks are made in the Eli Terry Style. 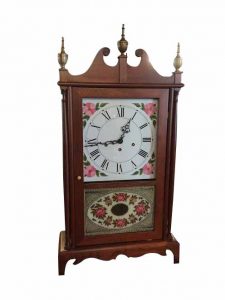 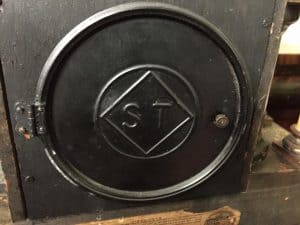 Seth Thomas founded Seth Thomas Clock Company in 1813. He originally bought Eli Terry’s Company, after having worked under him for several years. After Seth Thomas’s death, his sons continued the company, adapting to modern styles and tastes.

By 1880, the Seth Thomas Clock company began producing Black Mantel Clocks in order to copy expensive marble and onyx clocks from France. Seth Thomas Black Mantel clocks were made of three different materials. For a short period of time, Seth Thomas Company produced actual black marble cases. If you find a black mantel clock in marble, you can be sure that it was produced from 1887 to circa 1895. These black marble mantel clocks certainly cost a pretty penny in their day!

Thirdly, Seth Thomas is best known for his Adamantine Clocks. Adamantine is a celluloid veneer. Seth Thomas Company purchased the right to use this new material from the Celluloid Manufacturing Company of New York City in 1881. Thus, they manufactured the celluloid veneer material in different colors and patterns. Indeed, it could easily mimic the deep grains of marble or slate. Additionally, the veneer could also mimic wood mahogany grains. Seth Thomas Clock Company attached these veneers to simple wood case clocks. Adamantine clocks had production dates from 1882 until 1920. Many were also made by Ansonia Clock company. 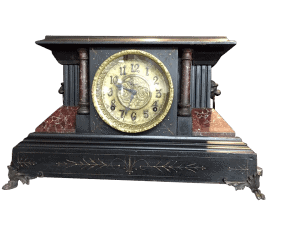 Gilbert Clock Company is another well known New England Clock Company. They delivered on the trend of mass produced clocks. They operated from 1871 until the 1960’s. 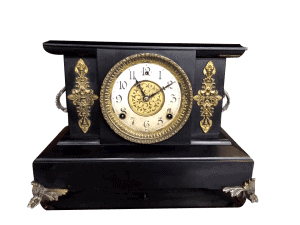 We love to collect Mantel Clocks from the 18th and 19th Century. Of course, they provide beautiful decoration for the eye. In addition, antique mantel clocks have sparked a passion for the history of clock technology and innovation. Finally, they provide a soothing background noise for life. The gentle tick-tock and bells of an antique clock provide a very gratifying sound that simply cannot be achieved by modern clocks!

Thank you for reading this article about the antique clock and its history! Hopefully it inspires you to research more about your own inherited clocks, or seek out antique clocks for your collection.