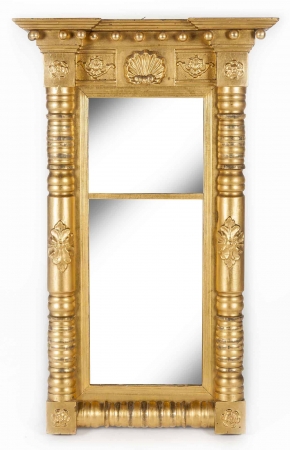 Age & Condition: Circa 1820. Glass shows some age. The Mirror has been re-gilded.

Beautiful period Adams Style Antique Gold Mirror with newer gilding from the McPherson Estate. This antique gold mirror is beautiful as a decorative item and is important as an artifact for Gettysburg Antiques. Very nice decorative antique.

This piece belonged to the McPherson Estate and is important to the Gettysburg antiques world. Edward McPherson was a very important figure for Gettysburg, Pennsylvania and for our nation’s history. He served twice in Congress. Later, Lincoln appointed him as Deputy Commissioner of Revenue in 1863. Edward McPherson also organized Company K of the Pennsylvania Reserves during the Civil War. After the war, McPherson worked to preserve the Gettysburg battlegrounds and to erect many of the monuments that can be seen there today. Additionally, he wrote and published a work on the Civil War. Indeed, Edward McPherson remained in Gettysburg following the war, until his death in 1895.

McPherson’s speeches to Congress demonstrate his passion for the nation, and his fierce devotion to President Lincoln. Of course, he very brazenly criticized his Southern contemporaries in South Carolina for leading the secession movement, which he calls “wicked and diabolical” and “hateful and despicable” . There, he warned of the collusion of those involved in the secession movement. Essentially, just four months before the first shots were fired at Fort Sumter, McPherson proclaimed in the marble halls of Washington,

“If all peaceful accommodation be refused…collision must come, let it come and on the aggressors rest the responsibility.” (The Disunion Conspiracy, January 1, 1861)

The name McPherson also lives on in the namesake of the first battle of Gettysburg: McPherson’s Ridge. This site is just a mile west of Gettysburg center and was inherited by McPherson from his forefathers. The battle began at about 8 am on the morning of July 1st 1863 and lasted until mid morning. McPherson’s Ridge saw blood soaked fields and brutal casualties with some estimates of around 2000 men either dead or badly wounded. The Confederates greatly outnumbered the Yankees (3200 to about 7000) and the Union forces faced a terrible defeat. The Confederacy took over McPherson’s stone barn as a field hospital. Today, McPherson’s barn still stands as one of the few original structures on the Civil War battlefields at Gettysburg.

This piece, along with others collected from the McPherson Estate, testifies to a fascinating period in our nation’s history and to our struggle to remain true to our Constitution. We are proud to present these historic pieces at Bohemians. Please feel free to contact us today. We can answer any questions you may have regarding this antique gold mirror or any Gettysburg Antiques. We also open by appointment.