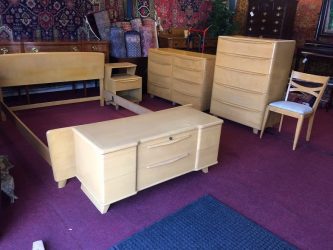 The answer is yes and no.

Over the years, we have sold a handful of Mid-Century Modern pieces. Honestly, these retro furniture pieces were kind of pretty in a weird way. (What can I say, we have great taste here at Bohemian’s.) 🙂 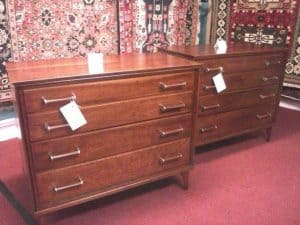 Overwhelmingly, though, I hate Mid Century Modern furniture. Here are my Top Nine Reasons why.

What is Midcentury Modern furniture?

Simply put, Mid Century Modern furniture is furniture produced roughly in the years from 1940’s until the 1960’s. Design wise, however, Mid Century furniture typically has simple lines and very little ornamentation. Typically, because it has no fuss, it is regarded as very functional furniture. New materials like plastic, resin and plywood found their way into Mid Century style furniture.

Now for the Reasons why I dislike it…

Mid Century Modern ironically started in the 1950’s and 1960’s with the idea of “bringing design to the masses.” Many of the original proponents of this modern design trend like Bauhaus and Le Corbusier (how pretentious are these names?) actually designed simpler furniture so that it could be accessible.

However, Mid Century furniture today is anything but accessible.

Instead, it seems MCM furniture name-dropping helps the upper crust feel self-important and stylish. They brag about their Miller chairs and Eames pieces as if God gave them a special place in Heaven for spending way too much money on ugly furniture.

Likewise, there is such snobbery that surrounds “original” pieces by famous Danish designers. To me, they look like simple prototypes for bad motel furniture. It’s as if Motel 6 decided to save money this year by making these plywood chairs for their lobby.

I love furniture. And I love factory produced furniture by Vintage makers. But Good Lord, high end factory pieces often take hours of workmanship to produce. A single Kittinger Clawfoot leg, for instance, can take several days for a craftsman to carve.

However, most MCM and MCM knock-offs are made by machine, and quickly. Indeed, the look of MCM furniture often echos this “machine aesthetic.” Stark, inorganic and cold, these mass produced pieces lack the handwork of other vintage furniture styles.

Mid Century Furniture styles have been reinvented in a thousands of different ways by high and low companies. Let me tell you, there just doesn’t seem to be enough diversity to keep reliving it! How many low back square sofas with stick legs can we tolerate?

As Michael Boodro (former Editor in chief of Elle Decor, of all places) says in this article from the New York Times, “Your eye does get bored. Twenty years ago, when midcentury was first being discovered, you could do a straight interior, and that was exciting. People want to go beyond the expected.”

Twenty years, people. There are really only a few things with that much staying power. Maybe Michael Jackson. And reggae. But it’s time for this overdone style statement to be over! RIP Mid Century Modern.

I don’t know about you, but the comfort level of MCM seems to be greatly over exaggerated. I see these little square dining chairs or low seated living room furniture with 1.5 inches of foam and I fail to feel the urge to snuggle up and watch a movie.

Likewise, I feel the itchy mohair of many Mid Century Sofas to be less than ideal, which brings me to my next point…

Plywood, plastic, mohair, vinyl, fake wood! Tell me again why I should buy this thing for well over $1000? I guess the one thing that makes MCM attractive is that is generally not as heavy as fine furniture…?

I just don’t like conformity that much. The ubiquitousness and popularity of MCM just makes me uncomfortable.

I hear people say it all the time. “It’s just so versatile. You can put it anywhere and with everything.” This makes me say, “What the…?”

I get that some people find it “surprising” and “fresh” to “juxtapose” their Victorian house with “Mid Century Pieces” (sorry, that was a lot of air quotes!) but I frankly fail to see the design versatility. To me, a piece of Mid Century Modern sticks out like a sore thumb in nearly every setting.

Minimalism requires way too much purging and editing for me. I like to put all my pretty things around so that I feel life has a reason for living and that reason isn’t some sort of cruel joke. Sorry, minimalists. I don’t get it.

After all, this isn’t Moscow (yet), and I want some variety of color, rich patterns and glamorous accessories! (The layered Traditional look calls to me in a much deeper way.)

Sorry snowflakes (aka Millenials)! This one is a tough one. I feel that our generation could be the most susceptible to marketing schemes. And to me, Mid Century Modern Furniture is like the Emperor’s New Clothes. In many ways, furniture stores and online conglomerates (Wayfair, West Elm, etc) found a gullible market in order to further their agenda of selling cheap low-quality furniture for high prices.

Plus, they figure, we can screw a peg leg into a piece of sawdust (as long as it’s pre-drilled) after all those years of our pricey educations.

Furthermore, since we have no money or job prospects, living four to an apartment until our late 30’s seems like a great time to introduce this lightweight and small apartment-sized furniture to the masses. Dare I say, Ikea?

So that’s my little rant about Mid Century Modern Furniture!

What are your thoughts on this design trend? I would love to know whether you agree that it’s time for MCM to die or whether this truly is a classic here to stay!

Thanks for reading!
Rachel LaBoheme
Head Creative Director of Bohemian’s

24 thoughts on “Why I Hate Mid Century Modern Furniture! A Rant by Rachel LaBoheme”