What the Value of Antique English Furniture? Is it Collectible?

Our video gives you a great introduction to English furniture. Direct Link.

Of course, William and Mary furniture designates furniture inspired by the co-reign of King William III and Queen Mary II in the seventeenth century in England.


Before her, Queen Mary II’s father King James II reigned as king of England and Scotland for only three years. From 1685 until 1688, King James II struggled as king, because he secretly adhered to the Catholic faith. Thus, many ruling Protestant elites feared and despised the Catholic King. They had King James II disposed by his own daughter Mary and her husband William of Orange in 1688. King James II fled to France. This moment became known as the “Glorious Revolution.” Subsequently, King William III and Queen Mary II ruled from 1689 until 1702.

Because King William III and Queen Mary II had previously ruled over the Netherlands, they brought a taste for Dutch styles to the kingdom. Heavy baroque style furniture started to transform with some lighter designs common in Northern Europe. Also, with a growing desire for comfort and luxury, William and Mary furniture often had more surface decoration. Elegant carvings or inlay often feature prominently on William and Mary style furniture. 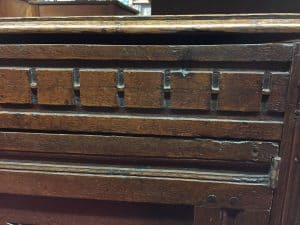 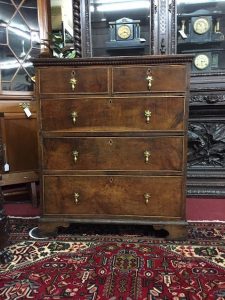 Likely, this antique oak chest came to America during the Colonial age. Colonists brought very few pieces of furniture with them to the new world. However, this antique English chest likely dates to circa 1710 or before. Of course, we can see strong heavy proportions and moldings around the drawers. Indeed, it also has a bit of geometric surface decoration around the keyholes, star shaped hardware and beaded wood trim.


This antique oak chest also demonstrates advanced joinery techniques for the era: pin and mortise joints in the case. 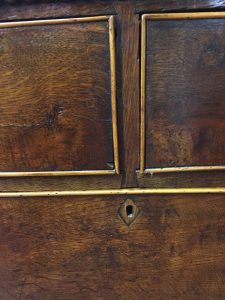 Pin and Mortise joinery represented great ingenuity of the William and Mary period. Of course, it allows great strength and stability in case furniture.

This antique oak chest of drawers illustrates very early antique English furniture techniques of the early 1700’s. It has a beautiful patina and great William and Mary style.

Likewise, this antique immigrants chest exemplifies an early artifact brought to the new world from England. 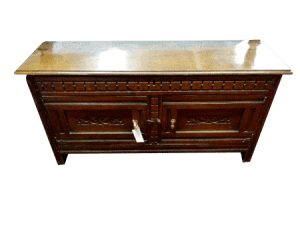 Of course, it shows the taste for William and Mary furniture, so likely a British crafts-person created this immigrants chest. It is a beautiful piece of Antique English furniture.


Of course, we see strong geometric patterns along the front of the immigrants chest, especially in the carved frieze, known as the top rail. Also, the two frontal doors have carved Renaissance style panels. Look at these medieval style hand carved leaf and vine carvings. 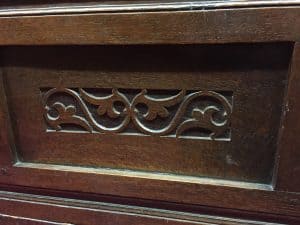 Indeed, this immigrants chest has strong features of the William and Mary style.


While there are some alterations to this immigrants chest (in the hardware and hinges, for instance), this immigrants chest displays many original elements. It has handmade wooden pegs, hand carvings and paneled doors. Also, we see how the stiles and panels were joined together in this early chest. Finally, it has both a lift top and front doors. 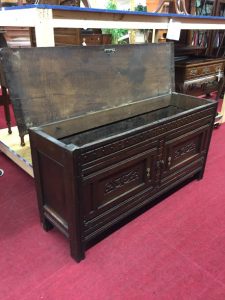 Of course, this immigrants chest represents an incredible piece of early English furniture that traveled with a family across the ocean to the new world. Certainly, this new world held promise of religious and economic freedom. Thus, this early immigrants chest would have held the few possessions that mattered to the immigrants. We can imagine it held a few blankets, a bible and other necessities.

After the reign of William and Mary, Mary’s sister Anne ascended to the throne. Queen Anne reigned from 1702 until 1714. However, when we talk of Queen Anne furniture, this term covers a style that really took place after her reign. Indeed, most historians classify Queen Anne furniture as furniture made from 1720 to about 1760. 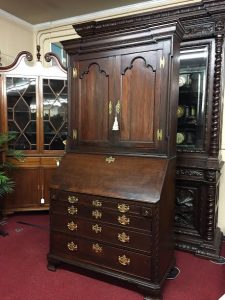 These paneled doors are framed by thick block-like moldings. Of course, these thick geometric moldings recall the heavy geometric elements of William and Mary furniture.


However, we see other elements that apply to Queen Anne and Chippendale styles. Of course, the design on the paneled doors has elegant carved scrolls. Also, when we open these doors, we see intricate scalloped shelves.

These elements adhere to popular Chippendale and Queen Anne styles of the early to mid 18th century.

The bracket feet, too, show popular style changes. Instead of flat bracket feet, we see “s”-curved feet. Obviously, the overlay pattern on the canted edges of the secretary desk demonstrate Chippendale influence. Indeed, this Chinese inspired latticework has Thomas Chippendale written all over it. 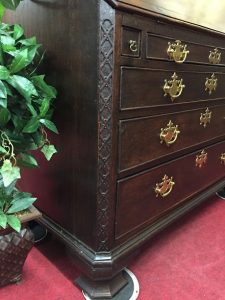 All in all, we can learn a lot about antique English furniture from looking at early examples of old furniture. William and Mary furniture has incredible and unique style. Essentially, period pieces from the early 1700’s era demonstrate great craftsmanship and masculine geometric design.

Queen Anne style later merged with Chippendale style from about 1720 to about 1770. In looking at transitional antique English furniture from this period, we can see the influence of William and Mary design, Queen Anne design and Chippendale style.

Thus, these three old furniture artifacts are collectible in their own right. Yet, they also allow us to understand the importance of English furniture history and its great influence on the world of design today.

Thank you for inviting us into your bohemian antique style home!
Written by Rachel Laboheme
Federal Desk

Bohemians Storefront Will Be Closed Feb 5 thru Feb 15. Regular Store Hours Return Feb 16. Contact us 717-375-8166 or by Email: rachel@ebohemians.com or the contact page or Facebook, Thank you & Happy Valentines Day! Dismiss