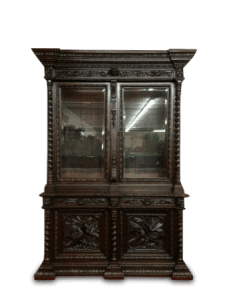 Beautiful antique cabinet is an example of Renaissance Revival and Gothic Revival Styles, common in Northern France in the 1850’s. All in all the finest French antique to be added to Bohemian’s antique collection in some time.

Most important are the hunt cabinets details as highlighted below.

This monumental solid oak hand carved hunt cabinet originated in Northern France in the 1850’s. While it takes our breath away with its size and beauty, the true art of the piece lies in the incredible craftsmanship. Even more the stories hidden within the antique cabinet.

The French Renaissance is a period generally situated between the 15th and 17th centuries. While France became a political and military powerhouse, the kingdom of France was engaged in messy conquests (both culturally and militarily) with parts of Northern Italy. “Renaissance” of course is a French word for “rebirth” and although historians bicker over whether the pan European Renaissance was more of an Italian or a French development, drastic changes during this period in art, architecture and philosophy forever altered Western Society from that of the previous “Dark Ages.” During these two centuries, some of the biggest and most glorious architectural wonders were built: the Chateaux of the Loire. Indeed this valley in France holds numerous Gothic and Renaissance marvels… These castles were built as “pleasure palaces,” no longer serving just as military fortresses. Flying buttresses, turrets, grand halls and other lavish details made these palaces true treasures for the eye and ostentatious expressions of wealth. A new lifestyle of the elite emerged, with Renaissance values of education, music and “joie de vivre” taking hold in the upper eshelons of French society.

But what does this have to do with this antique cabinet, built two hundred some odd years later in the 19th Century?

This Massive Cabinet, with its incredible friezes, brute animal faces and lively birds brings to life the thrill, excess and excitement of one of the French nobility’s favorite past-times: “la chasse” (Translation: the hunt). To explain, during the French Renaissance, Hunting became a privilege for the nobility: big game hunting (bear, deer) was reserved for nobles and elite. It was during the reign of François Ist that many natural domains became reserved exclusively for royal hunt. Hunting alongside the king of France was a rare privilege and honor among the nobles.

Indeed this antique cabinet, harkens back to this time of French Nobility, pleasure hunting and of course, true opulence beyond belief. See our example of a Antique of The Week: Antique Cupboard The cabinetmaker’s heavy carvings of beasts and fauna are truly Gothic/Renaissance in style; contorted faces, furrowed brows and open jaws all give the look of utter beastliness. These are not gentle prey; they are dangerous beasts taunting us, the courageous conquerors. Daggers thrash through a pair of perched falcon or small game on either door of the cabinet. As can be seen ruffled feathers seem to almost flutter outwards towards us. The French antique with animated scenes so realistically rendered. As a result we can almost hear the shrieking bird calls as they toss about. Nature as seen through this Renaissance Revival piece is a thrilling world of action. Above all depicting the struggle between the conquerors and the conquests. Although during the Renaissance in France the nobility class as it was known, lost much of its power during the Revolution. Furthermore the Establishment of the Declaration of the Rights of Man in 1789, declared all men equal under the law. However the nobility lived on periodically throughout the 1800’s and some would say, even today. This french antique cabinet is thus the 19th Century expression of a noble’s way of life in the good old days where Kings and Queens ruled the land and enjoyed a truly French “joie de vivre.” The cabinetmakers truly sought to highlight the thrill and game of the hunt in the most opulent and resounding way possible.

Antique Mirrors : Can Old Mirrors be Worth Money?

Victorian Sofa: Before and After Restoration