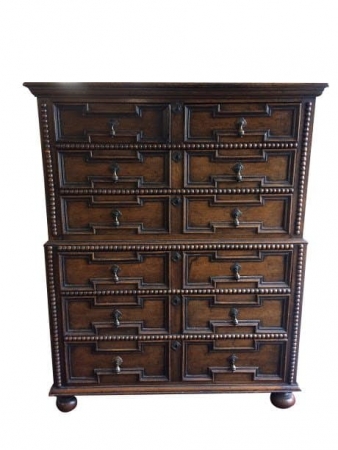 Condition: Some replaced trim. Hardware has been replaced. Please see condition report at the end of the long description.

Shipping: We do not ship nationwide. We use our own in-house team of seasoned White Glove Delivery professionals to carefully deliver and set up our pieces in your home. HOWEVER, we can only deliver within a 250 mile distance of our store in Waynesboro Pennsylvania. Most deliveries are based on $1 per mile round trip plus a $50 base fee. SHIPPING FEES ARE NOT INCLUDED WITHIN THE PRICE. After purchase, a member of our staff will contact you to confirm delivery/pick up details.
If you have any questions or would like to purchase by phone, please call 717-375-8166.

This rare early handmade chest was acquired from a Philadelphia Estate and is an excellent example of the very early and short-lived Colonial expression of William and Mary Style (also known as Early Baroque) Furniture. It is crafted of solid oak and has superb surface decoration of applied moldings and half bobbin spindles. It is a chest on chest made in two separate pieces, as is often the case with early pieces made in Colonial America. It also features one of the greatest advances in early furniture making– dovetailed and side hung drawers.

The earliest immigrants to America could not bring much if any furniture with them from Europe, but they did imitate Continental and British styles. Artisans and cabinetmakers studied printed pattern books from Europe and while Charles II is credited for bringing a new Louis XIV Baroque style of decorating to the English courts in the 1660’s, it wasn’t until the joint reign of William and Mary in 1689-1702 that this Early Baroque style reached the colonies.

One Feature of William and Mary style is a love of strong geometry. On this chest, each drawer shows the layered rectilinear patterns of moldings common of the period. Very architectural, the effect of these moldings is great visual depth and a strong masculine presence. Also it shows superb wood working abilities to not only craft solid oak moldings with hand tools, but to miter and arrange them in perfect symmetry. This type of surface treatment was purely decorative; in other chests of this period we see delicate veneer work and paint as alternative surface decorations.

The bobbins demonstrate great skill and craftsmanship too. A “turner,” as these skilled craftsmen were called, would have crafted a full string of bobbins using a lathe. Then he would have meticulously chiseled it in half vertically to provide a flat surface in which to attach it to the case. Upon close inspection, the imperfections of these strings of bobbins becomes visible, attesting to the true handy-work (and hours of labor) of this piece.

Wealthy merchants making their way in America often had the luxury of furnishing large expansive homes in these new fashionable tastes of the time. However, the William and Mary Style was a taste purely for the elite and never reached mass appeal in America. Complicated forms, thin veneer work and time consuming joinery cost a pretty penny. We can likely determine that this piece was owned by someone of high taste and of well means.

It combines a stunning and unique look with ultimate signs of early craftsmanship. Drawers are chiseled with a track on each side and glide better than some pieces produced today. The moldings and bobbins create a textured and impressive look, meant to convey wealth and prestige. It truly is a fantastic surviving example of the early Colonial American William and Mary Style. By the 1720’s, this style fell out of taste, being replaced almost completely with Queen Anne and Chippendale styles. The rarity and beauty of this chest certainly will live on for a collector interested in preserving this unique time period and furniture style.

Condition Report: Excellent Condition with most of the piece being original. One top molding has been replaced. Hardware and escutcheons do not appear to be original. Some more modern nails have been used in drawer backs and on the back. A separation appears on the top of the case between the seams of the boards. Great patina. Overall magnificent condition with no other remarkable problems or issues.

You're viewing: Antique William and Mary Chest on Chest “Sold”
Buy It Now