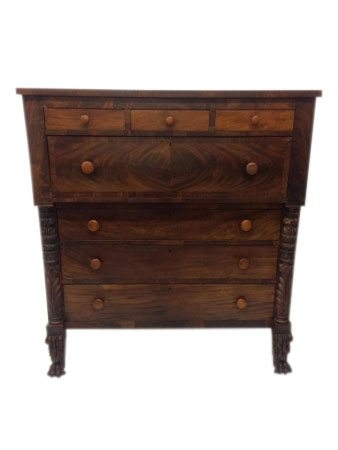 Condition: Very good antique condition, all drawers function well. A few patches have been made to the veneer in spots, some slight damage to the toes on the right paw. A piece of tempered glass has been fitted to the top.

Shipping: We do not ship nationwide. We use our own in-house team of seasoned White Glove Delivery professionals to carefully deliver and set up our pieces in your home. HOWEVER, we can only deliver within a 250 mile distance of our store in Waynesboro Pennsylvania. Most deliveries are based on $1 per mile round trip plus a $50 base fee. SHIPPING FEES ARE NOT INCLUDED WITHIN THE PRICE. After purchase, a member of our staff will contact you to confirm delivery/pick up details.
If you have any questions or would like to purchase by phone, please call 717-375-8166.

This is a beautiful antebellum mahogany chest of drawers from the American Empire Period, roughly 1840. It features a beautiful mahogany veneer pattern throughout the drawer faces and an exquisite carved half column on either side of the chest. The legs are culminated in an incredibly detailed paw foot on either side. The American Empire period is widely known as a re-invigoration of classic forms; columns and deep fancy mahogany veneers and figure work were common on large case pieces of the first half of the 19th century. This type of highly carved column with acanthus leaves and paw feet was more commonly perfected by fine cabinetmakers from large cities of Philadelphia and Boston, and certainly took more skill then simply turning on a lathe. It gives this piece more prominence and suggests it might have been owned by a prominent merchant or politician.

Some slight damage to the toes on the right paw, as to be expected with age. Some patches of veneer have been expertly fitted and replaced. A piece of tempered glass protects and preserves the natural aging of the top.